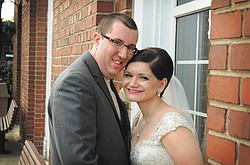 A reception followed at the Davis Center in Fellows Riverside Gardens.

She is the daughter of David and Marie Basile of Poland, and he is the son of William Lewis and Joyce O’Connell of Girard.

The couple honeymooned in Cancun, Mexico, and live in Girard. They will relocate to Baltimore in December.

The bride, who will use the last name Basile Lewis, wore an ivory lace trumpet-style gown with crystal embroidery, a sweetheart neckline, cap sleeves and beaded appliques.

The bride graduated from Youngstown State University with a bachelor’s degree in political science and a master’s in history. She is employed as curator of collections for the McKinley Birthplace Museum in Niles.

The groom graduated from YSU with a bachelor’s degree in political science and received a law degree from Harvard Law School. Beginning in December, he will begin a position as prosecutor in the Baltimore City State’s Attorney’s Office.