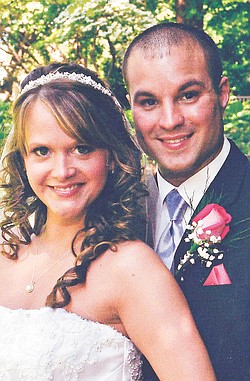 Parents of the bride are Hugh and Fran Connolly of Austintown, and parents of the groom are Ralph and Peggy Stellato of Boardman.

After a wedding trip to Nassau, Bahamas, the couple reside in Boardman.

The bride received an associate degree at Penn State Shenango. She works as a physical therapist assistant at Premier Therapy in Youngstown.

The groom earned a bachelor’s degree in history from the University of Mount Union. He works for the Ohio Department of Jobs and Family Services in Boardman.

Sisters of the bride, Shannon Milliken and Michelle Wackerly, were her honor attendants. Bridesmaids were Jaime Connolly and Nicole Connolly, sisters-in-law of the bride; Michele Vennetti and Stephanie Cicchillo, sisters of the groom; Dina Emrick, the bride’s cousin; Christy Patton; and Carly Melewski.

The groom’s nieces, Gianna and Jaelyn Cicchillo, were the flower girls. The attendants wore fuchsia-colored dresses.

The bride’s nephew Shane Connolly was the ring bearer.