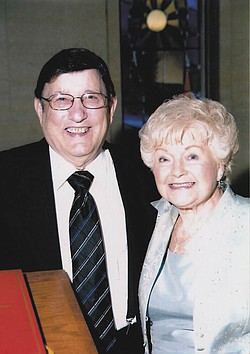 Mr. and Mrs. Carl Pedaline of Youngstown marked their 70th wedding anniversary March 11, and their family will honor them with a dinner at a later date.

The couple’s children are Janet (Mike) Murray of Canfield; Patti (Steve) Gondol of North Jackson; and Joe Pedaline (Suzanne Murphy) of Youngstown. They also have seven grandchildren and six great-grandchildren.

Mrs. Pedaline worked as a teller at Dollar Bank in Liberty and retired in 1988. She is a member of East Garden Club, AARP in Canfield and the Silver Dollar Gang.

Mr. Pedaline worked as a heating inspector for Youngstown City Hall and retired in 2001. He is a member of Knights of Columbus Council 3144, VFW Post 8841 and is a World War II U.S. Army veteran.