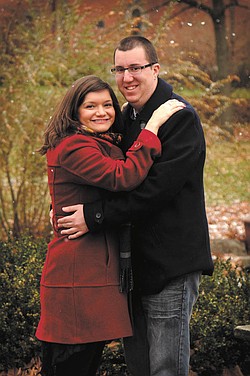 Samantha Basile of Poland and Jim Lewis of Girard are engaged, their parents are announcing.

Her parents are David and Marie Basile of Poland, and his parents are William Lewis and Joyce O’Connell of Girard.

The couple plan to marry at 2 p.m. Aug. 23 at St. Maron Parish, and a reception will follow at the D.D. and Velma Davis Center at Fellows Riverside Gardens, both in Youngstown.

The bride-elect graduated from Youngstown State University, where she received a bachelor’s degree in political science and a master’s degree in history. She is curator of collections at McKinley Birthplace Museum in Niles. She also is assistant curator and archivist for the Sutliff Museum in Warren.

The prospective groom, also a graduate of YSU, received a bachelor’s degree in political science. He also earned a juris doctorate at Harvard Law School. He has accepted a position with the Baltimore City State’s Attorney’s Office as an assistant state’s attorney, beginning later this year.