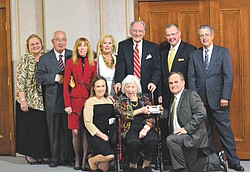 SPECIAL TO THE VINDICATOR Jeanne D. Tyler donated a half-million dollars to Stambaugh Auditorium, which has prompted the Grand Ballroom to be renamed the Tyler Grand Ballroom. A dinner in her honor took place May 7, and some of those present follow. In front, from left, are Margaret Adams, Tyler, and Mark Gasser. In the back are Susan Berny, Jim Sisek, Suzyn Schwebel-Epstein, Jeanne Simeone, William Conti, Terrence Cloonan and J. David Sabine.

Stambaugh Auditorium hosted a dinner May 7 to honor Jeanne D. Tyler, Capital Campaign honorary chair, for her contribution of $500,000 to the campaign.

Tyler’s contribution has helped provide a complete kitchen renovation, a new and bigger entryway including a ramp, a wall of closets for storage and a service corridor. The announcement was made that the Grand Ballroom will be named the Tyler Grand Ballroom.

Tyler also spoke, expressing her gratitude for the evening.

The Capital Campaign began in March 2013 with goals for renovating the Grand Ballroom in several areas as well as for restoration work on the building’s exterior.

For information about the campaign and related projects, call the administrative office at 330-747-5175 or email questions to info@stambaughauditorium.com