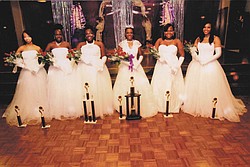 She is the daughter of Tami Elkins and Terry Hill and is a senior at Warren G. Harding High School. Her escort was Jermaine Damon Jones Jr., son of Patrice Alexander-Dortch and Jermaine Jones Sr., also a senior at Harding.

First runner-up was Anaya Lynne Langford, daughter of Ericka and Barry Langford. Her escort was Jalen Edward King, son of Elizabeth C. and Edward King Jr. Both are seniors at Harding.

Other escorts were: De’Orein Jajuan Dukes, son of Juanita Caldwell and Anthony Dukes and a senior at Howland High School; Bralin Najee Johnson, a junior at Harding and son of Towan Johnson and Michael S. Jones Sr.; and James Burney, a senior at JFK and son of James Burney Sr. and the late Tameika Burney.

Evelyn Peterson was the chairwoman of the ball, Vernita Provitt was co-chairwoman and Gloria R. Rodgers is Warren Civic League president.