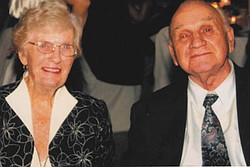 Mr. and Mrs. Frank Brosko of Boardman marked the 50th anniversary of their wedding Aug. 29 at a family celebration at the home of their daughter and son-in-law, Denise and Jim McConnell of Canfield.

The Broskos are members of Holy Family Church in Poland.

Mrs. Brosko worked 12 years in the billing department of Commercial Shearing in Youngstown before becoming a full-time homemaker.

Mr. Brosko worked as a teacher for the Youngstown Board of Education before retiring in 1984. He belongs to the Ohio, national and Youngstown education associations.

Mr. Brosko and the former Shirley Varley were married Aug. 29, 1964, at St. Edward Church in Youngstown.