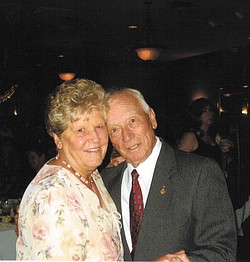 Ralph and Florence Griffiths of Girard marked their 65th wedding anniversary with a dinner party June 4 at the Olive Garden in Niles. It was hosted by their niece and nephew Larena and Ed Semeraro and friends, Barbara and Jerry Brewer.

Their children are Ralph (Karen) Griffiths of San Diego and the late Frank Griffiths. They also have two grandchildren and four great-grandchildren.

Mr. Griffiths married the former Florence Spellman June 4, 1949, at First Assembly of God Church, where they are members.

Mrs. Griffiths retired in 1991 from Packard Electric in Warren.

Her husband retired in 1994 from Institutional Foods in Warren, where he worked as a sales representative. He is a World War II Marine veteran and was wounded in action at Iwo Jima.