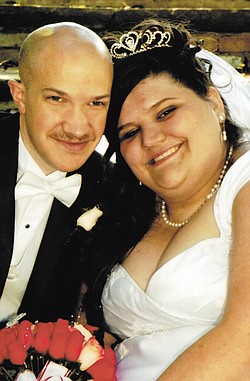 The bride wore a satin ball gown with beaded off-the-shoulder pleating. The skirt was adorned with beading and featured an elongated chapel train.

Shawna Polverine and Caryne Urbank were maids of honor. Bridesmaids were Mary Smrek and Anne Smrek, sisters of the groom; Tiffany Touville and Kayla Parkhurst, cousins of the bride; Emilee Smrek, cousin of the groom; and Lillian Maxwell.

Natalee Balestra, the groom’s cousin, was the flower girl.

Nathan Smrek, the groom’s cousin, was the ring bearer.

The bride received a degree in nursing from Choffin School of Practical Nursing. She is a licensed practical nurse for Home Health Care.

The groom received a degree in criminal justice from Youngstown State University. He works for Windsor House Inc. in Masury.

After a wedding trip to the Bahamas, the couple reside in Boardman.