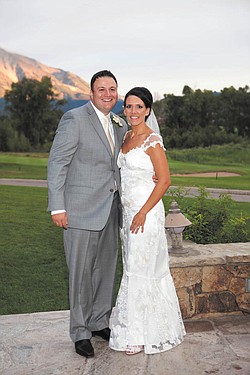 The Old Thompson Barn at River Valley Ranch was the setting of the Aug. 10 wedding and reception of Peggy Scott and Fred Battisti Jr. The Rev. Karen LaJoy Smith officiated at the wedding.

The parents of the bride are Jeff and Jo Ann Scott of Houston and the late Lynda Scott Everett. The groom’s parents are Fred Sr. and Kathy Battisti of Liberty.

The bride wore a lace embellished gown with floral embroidery.

The couple earned bachelor’s degrees from Ohio State University. She studied art, and her husband, science.

The couple have planned a honeymoon trip to France, Germany and Spain in December.

The couple reside in Atlanta.