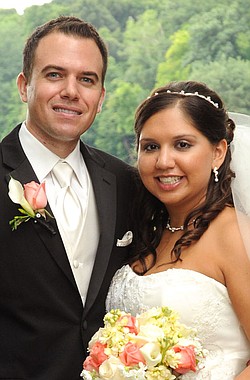 St. Maron Church provided the setting for the 2 p.m. Aug. 11 wedding of Ashley Basile, daughter of David and Marie Basile of Boardman, and Aaron Oeken, son of Charles and Cynthia Oeken of Ashland, Ohio.

Chorbishop Michael Kail officiated, and a reception followed at Avion on the Water in Canfield.

The bride is executive director of Engage! Cleveland. She earned bachelor’s and master’s degrees in business administration from Youngstown State University.

The groom is a lead financial management analyst for Defense Finance & Accounting Service in Cleveland. He received a bachelor’s degree in business administration from Ohio Northern University.

After a honeymoon to Hawaii, the couple reside in North Olmsted, Ohio.