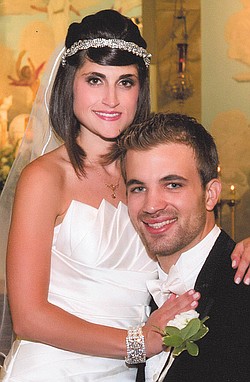 Felicia Maria Ciotola and David Wayne Drevna, both of Canfield, were united in marriage June 23 at Our Lady of Mount Carmel Church. The bride’s uncle, Monsignor Romano Ciotola of Our Lady of Victory Church in Columbus, officiated. An evening reception took place at Tippecanoe Country Club in Canfield.

The bride wore an ivory silk satin gown with a crumb catcher top with a ruched bodice and belt embellished with crystals. Her chapel length train was made of pleats with soft pickups. A headpiece of crystals and pearls complemented her fingertip veil.

Matron of honor was Joanna White, and maid of honor was Adrianna Ciotola, both sisters of the bride. Bridesmaids were Nina Zordich; Ashley Goclano; Marissa Poe; Marisa DeSanto, cousin of the bride; and Alicia Drevna, sister of the groom. The bride’s niece, Gemma White, was the flower girl. The attendants wore champagne shimmer chiffon gowns.

The bride received a bachelor’s degree in early childhood education from Youngstown State University and is a kindergarten teacher at Ursuline Preschool and Kindergarten in Canfield.

The groom received a bachelor’s degree in science and biology from YSU and is a second year student at Northeast Ohio Medical University.

The couple honeymooned in the Turks and Caicos Islands and are living in Boardman.