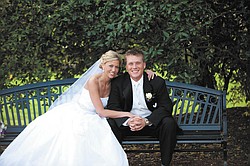 Mr. and Mrs. Christian Chase Senk are making their home in Brecksville, after their wedding Oct. 15, 2011, at St. John the Baptist Catholic Church in Canton. The Rev. Ronald Klingler heard the exchange of vows.

A reception at McKinley Grand Hotel in Canton honored the couple, who honeymooned in St. Lucia.

The former Kristen Marie Cady is a daughter of Craig and Stephanie Cady of Canton. The groom is a son of Marion and Sheila Senk of Cortland.

Mrs. Senk graduated from Walsh University with a bachelor’s degree in government and foreign affairs and from the University of Akron with a law degree. She is an associate attorney with Benesch, Friedlander, Coplan and Aronoff.