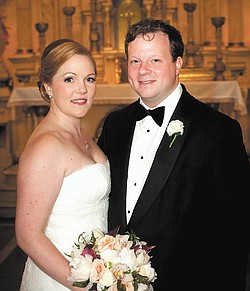 A reception followed at Arnaud’s Restaurant, also in the French Quarter.

Parents of the couple are Mary and Harry Widmann of Metairie, La.; and Karen and James Kimmel of Boardman.

Maid of honor for her sister was Julia Widmann. Bridesmaids were Colleen Carney, the groom’s cousin; Katrinia Boniewski and Sarah Beck, the bride’s cousins; and Victoria Battista. They wore dark purple gowns. The bride’s cousin Elisa McDonald was flower girl.

The bride graduated from Newcomb College of Tulane University with a bachelor’s degree in political economy. She is the press secretary for the American Association for Justice in Washington, D.C.

The groom graduated from Ohio State University with a bachelor’s degree in computer science. He is the technical director for the Association of American Law Schools in Washington, D.C.

The couple live in Washington, D.C.