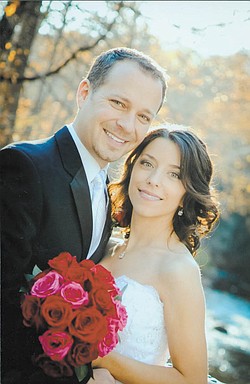 United in marriage on Nov. 5, 2011, were Nicole Kocanjer of Boardman and Adam Carano of Hubbard.

The Rev. Timothy H. O’Neill presided when the couple exchanged vows at St. Patrick Church. A reception followed at the Maronite Center in Youngstown.

The bride is the daughter of Melanie Quahliero of Struthers and the late Nickolas Kocanjer. The groom is the son of Dan and Kathy Carano of Hubbard.

Samantha Pavlik, the bride’s sister, was her matron of honor, and bridesmaids were Nadine Kocanjer and Sandy Greco, also sisters of the bride; Kelly Carano, sister-in-law of the groom; Mandy Updegraff, Kelly McDade, Sarah Livesay and Tiffany Nespeca. Attendants were attired in deep red.

A niece of the bride, Sydney Pavlik, was the flower girl.

Mrs. Carano earned a degree in accounting from Youngstown State University. She is employed as an accountant for DFAS in Cleveland.

Mr. Carano is also a graduate of YSU, where he earned a degree in business administration. He is a manager for Golf Headquarters in Niles.

After a honeymoon in Aruba, the couple are living in Hubbard.