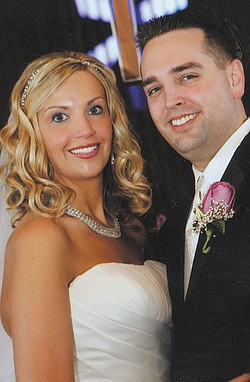 The Rev. Russ Adams officiated at the 2 p.m. wedding ceremony. A reception followed at Mr. Anthony’s at the Maronite Center, Youngstown.

Parents of the couple are C. Edward Gibbs Jr. of Warren and Frank and Linda Stellato of Struthers.

After a wedding trip to Playa Mujeres, Mexico, the couple reside in Austintown.

Maid of honor was Savannah Henderson, cousin of the bride, and matron of honor was Jennifer Melewski. Bridesmaid was Victoria Campos, Faith Stellato, the groom’s niece, was flower girl.

The bride is a bookkeeper for Windsor House Inc.

The groom received a bachelor’s degree from Youngstown State University and is a clinical specialist for Cook Medical.