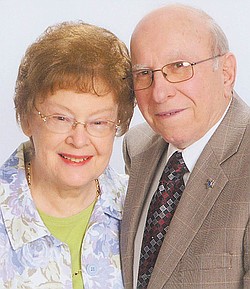 A dinner party Aug. 19 at The Elm Tree in Struthers honored Edward and Agnes Billock of Youngstown for their 50th anniversary.

The couple’s children and their spouses hosted the celebration: Edward Jr. (Susan) Billock of Mott, N.D.; and Mary (Robert) Ford of Boardman. Eleven grandchildren and two great-grandchildren round out the family.

St. Brendan Church in Youngstown was the setting when the former Agnes Hestin and Mr. Billock were married Aug. 18, 1962.

Mr. and Mrs. Billock also took part in a 50th anniversary Mass at St. Columba Cathedral on June 24, when they renewed their vows with other couples.

Mrs. Billock is a homemaker.

Her husband worked in the mailroom of The Vindicator for 42 years before retiring in 1995. He also served in the U.S. Army from 1951 to 1953 during the Korean War.