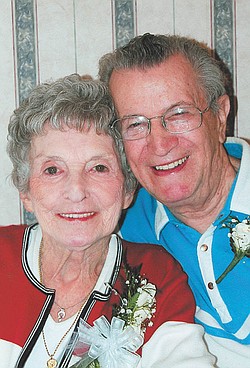 Anthony and Dolores Zimbardi of Boardman were the guests of honor at a surprise anniversary party hosted by their children and their spouses July 22.

The Zimbardis celebrated their 60th wedding milestone at an afternoon affair with loved ones at A La Cart Catering in Canfield.

Mrs. Zimbardi worked for Burton Supply, Youngstown, as secretary to the vice president before she retired. She is a member of Starlighters Dance Club and numerous bowling leagues.

Mr. Zimbardi was a machinist and die maker for Syro Steel in Girard before he retired. He also belongs to many bowling leagues.

Mrs. Zimbardi, the former Dolores Boyle, and her husband were married July 19, 1952, at St. Joseph Church, Youngstown. They are members of St. Dominic Church in Youngstown.