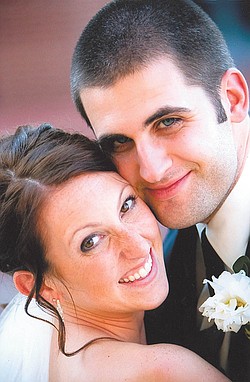 Callista Marie Conzett and Ryan Todd Dammann, both of Columbus, were united in marriage Oct. 8, 2011, at St. Andrew Church. The afternoon ceremony was solemnized by the Rev. Michael Watson, and a reception followed at The Blackwell in Columbus.

The bride is the daughter of Kenneth and Lisa Conzett of Poland. Parents of the groom are Douglas and Peg Dammann of Napoleon, Ohio.

Shayna Conzett, wearing black, attended her sister as maid of honor. Bridesmaids, also in black dresses, were Chelsea and Chandra Conzett, sisters of the bride; Kelly Hobbins; Erica Fannon; Rachel Musheff; and Amy Dammann, the groom’s sister. MaKenna Helmke and Ellen Bordner, both cousins of the groom, were flower girls.

The couple are graduates of Ohio University. Mrs. Dammann earned a bachelors degree in journalism and is employed as a marketing specialist for Nationwide Children’s Hospital in Columbus. Mr. Dammann holds a bachelor’s degree in business administration. He is a senior auditor with Deloitte and Touche in Columbus.

The couple are living in Columbus after spending their honeymoon in Punta Cana, Dominican Republic.