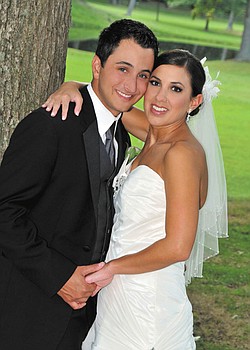 Making their home in Columbus after their marriage Sept. 18, 2010, and a honeymoon in Jamaica are James R. Fitori Jr., son of James Sr. and Priscilla Fitori of Boardman, and his bride, the former Amanda L. Moritz, daughter of John and Adalea Moritz, also of Boardman.

The Rev. Paul W. Heine officiated at the 2:30 p.m. ceremony, and a reception followed at Avalon at Squaw Creek in Vienna.

Her attendants, in purple taffeta gowns, were her sister, Jessica Tew, as matron of honor; and her cousin, Ann Marie Lariccia; the groom’s sister, Elizabeth Masternick; and Lora Demetrios as bridesmaids.

Best man for the groom was Brian Rutherford, and groomsmen were Jason Belcastro, Josh Miller and Nick Demetrios.

The bride is an operations trainer with Walgreens in Columbus after earning a bachelor’s degree in business from Ohio State University.

Mr. Fitori is a manufacturer’s representative for IKO Industries in Columbus. He holds a bachelor’s degree in business from Mount Union College.