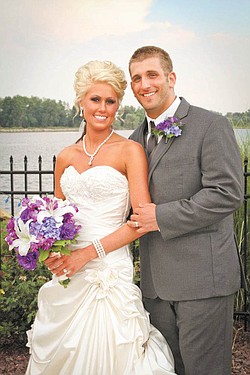 Making their home in New Middletown after a honeymoon cruise to the Florida Keys, Grand Cayman Island and Jamaica are Jaimie Lynn Foster and Aaron Jeffrey Hochmann, both of New Middletown.

The Rev. Robert Reese and the Rev. Mark Wilds performed the afternoon ceremony for the daughter of David and Melissa Foster of New Middletown and the son of Jeffrey and Valerie Hochmann of Lisbon.

A reception followed at Avion on the Water in Canfield.

The bride wore an ivory strapless ball gown with a sweetheart neckline embellished with embroidery and Swarovski crystals. The gown featured a dropped waistline and an asymmetrically ruched skirt.

Mrs. Hochmann graduated from Casal Aveda Institute with a degree in cosmetology. She is a hair stylist, makeup artist and color specialist at Salon at Creekside in Canfield.

Mr. Hochmann is attending Youngstown State University, where he is pursuing a degree in exercise science and dietetics. He is employed by GNC in Poland.