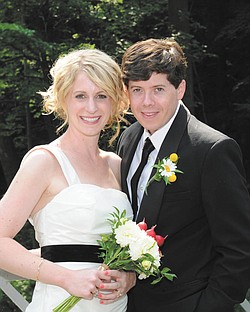 Monsignor William J. Connell officiated at the 1:30 p.m. ceremony for the daughter of Tom and Paula Reardon of Poland and the son of Martin and Helen Lawson of Cincinnati. A reception followed at Avalon Inn’s Grand Pavilion in Howland before the couple left for a honeymoon in Santorini, Greece.

The couple are making their home in Washington, D.C., where the bride is assistant vice president of Widmeyer Communications, and the groom is an account supervisor for GMMB. The bride holds a bachelor’s degree from Duquesne University and a master’s degree from Johns Hopkins University.

The groom earned a bachelor’s degree from Ohio State University and a master’s in business administration from Johns Hopkins.