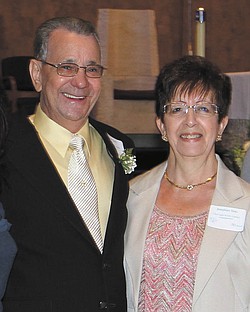 Josephine and Eugene Testa of Poland marked their 50th wedding anniversary Nov. 8 at a dinner party hosted by their children.

Celebrating with their parents were Mike (Staci) Testa and Janet (Mike) Audi, all of Poland. The couple also have six grandchildren.

The couple renewed their wedding vows in June at St. Columba Cathedral, Youngstown, and were honored at a family dinner at Nicolinni’s Restaurant.

Mr. Testa and the former Josephine Rulli were married Nov. 11, 1961, at Immaculate Conception Church in Youngstown.

The couple are members of Our Lady of Mount Carmel Church in Youngstown.