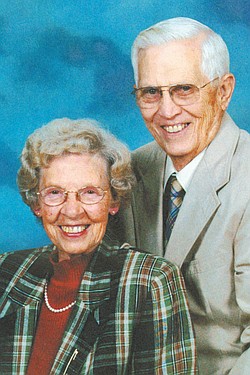 Richard J. and Naomi Hart of Boardman were honored on the occasion of their 60th wedding anniversary June 11 during a dinner at Springfield Grille in Poland.

The former Naomi D. Ferguson and Mr. Hart were married June 12, 1951, at St. Ann Church in the Brier Hill neighborhood of Youngstown.

A graduate of Youngs-town State University, Mr. Hart retired in 1978 from LTV Steel Corp. He is an independent salesman working with Phoenix Marketing Group of St. Paul, Minn.

The couple are charter members of St. Luke Church and members of the Youngstown Maennerchor, and are involved with St. Vincent de Paul Society.

Mrs. Hart also is a member of the St. Luke Altar and Rosary Society and Seton III.

A former Scoutmaster, Mr. Hart also is a member of the Holy Name Society and Sierra Club.