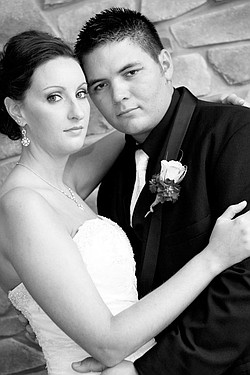 Hawk Hollow Golf Resort was the setting on Sept. 18 as Erin Listerman and Jeff Melnick were united in marriage during a 2 p.m. ceremony officiated by the Rev. Ken Harger.

The bride is a daughter of Terese’ Listerman of Iona, Mich., and the late Charles Listerman, and the groom is a son of Jeff and Pauli Melnick of Hubbard.

The bride’s strapless champagne-colored gown was enhanced with an ivory lace overlay.

Best man was Jerad Jordan, and groomsmen were Matthew Morrison, the groom’s brother-in-law; Matthew Anthony; Aaron Florek; and Eric Lubonovich. Ushers were Logan Bowling, the bride’s cousin, and Dario Angelo, a cousin of the groom.

The bride graduated with a bachelor’s degree from Grand Valley State University and is an ultrasound sonographer with UPMC Hospital in Farrell, Pa.

The groom graduated from the Motorcycle Mechanics Institute and Lincoln Electric. He is a custom bike builder for Knievel Cycles in Greenville, Pa.

The couple honeymooned at St. Lucia in the Caribbean and live in Hubbard.