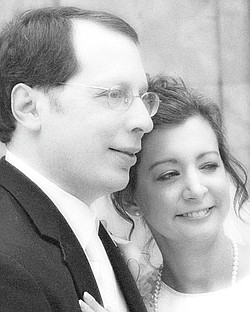 Nancy A. DiLoreto and Thomas J. Lambert were united in marriage Sept. 4 at St. Rose Church during a ceremony solemnized by the Rev. Monsignor John Zuraw and the Very Rev. Richard Lambert, a cousin of the groom.

The ballroom at the Avalon Inn was the setting later that day for a reception, where the couple greeted guests.

Parents of the bride are John and Patty DiLoreto of Warren, and the groom is a son of Sophie Lambert of Girard and the late Joseph Lambert.

Joe Lambert performed the duties of best man for his brother, and groomsmen were Mike Wolfgang, his brother-in-law; Bryan DiLoreto, a cousin of the bride; Sam Bluedorn, and the groom’s nephew, Michael Wolfgang.

Mrs. Lambert graduated from Mercyhurst College and the University of Akron.

Mr. Lambert is a graduate of Trumbull Career and Technical Center.

The couple live in Warren.