Finding a cure one lap at a time 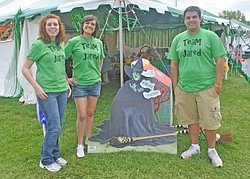 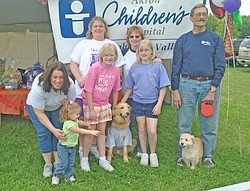 Neighbors | Shaiyla Hakeem .Boardman's Alex Downie (left), Taylor Hanigosky, Chris Wilkins, Jimmy Tancabel, Alana Leshansky and Abby Slates camped out during Boardman's Relay for Life. They are a part of Team-X and were at the relay from the beginning until the end. 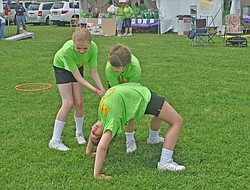 Neighbors | Shaiyla Hakeem .To pass time, Youngstown's Lexi Jacobs (front) is aided by Struther's Brianna Thompson (left) and Polands Mary Kate Kelty as she does a back bend. All three were a part of team Burke. 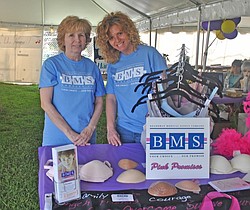 Neighbors | Shaiyla Hakeem .Boardman Medical Supply's Ronnie Tomko (left) and Jacqueline Martin offer information on breast mastectomy and the aftermath. They are both bra fitters and a mastectomy boutique will be opened in BMS this year.

The yellow brick road led to the track of Boardman Center Middle School where hundreds united in support for a cure.

The school sponsored its 16th American Cancer Society Relay for Life May 14 and 15. The event took on the theme “There’s No Place Like Hope” inspired by the infamous line from “The Wizard of Oz.”

More than 35 team tents covered the grounds of the middle school with raffles, games and contests from 6 p.m. May 14 until 6 p.m. the following day.

The event was jump-started by a survival lap around the track and included an evening luminary ceremony for those who lost their battle with cancer and an ending ceremony to conclude the 24-hour relay.

Mark Luke, Mahoning County American Cancer Society board member, said aside from the fundraising aspect of the event, it was used as a tool for spreading awareness about the disease and living a healthy lifestyle.

“As the incident rate is going up, so is the survival rate,” he said. “There are cures out there, it’s all about catching it early.”

This community event, according to Luke, typically has been the second largest Relay for Life in Ohio. The state averages 220 relays a year. All proceeds from the event will be donated to the American Cancer Society to help fund research.

There wasn’t a period during the relay event where someone wasn’t walking on the middle school’s track. The number of laps walked varied from team to team and person to person, but endurance walkers lapped the track continuously for the entire event. Dave Redig, of Boardman, was one of these walkers.

Redig, who was also team captain for the WKBN/WYTV team, had a cousin who passed a couple years ago from leukemia, prompting his participation. Redig said his cousin was younger than him and made him reevaluate his view on life.

“Here’s a person who had his whole life ahead of him,” he said. “Everyone is affected by someone who has cancer in one way or another.”

This relay marked Redig’s third year participating as an endurance walker. Aside from 10-minute breaks each hour, he continued to walk until the closing ceremony. “Tomorrow I will be sore, but it’s nothing compared to what someone goes through with treatment.”