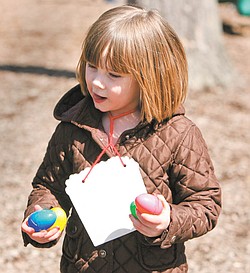 Emma Haase runs through the playground with her holiday bounty during the Easter egg hunt Tuesday sponsored by the Boardman Kiwanis for kindergarten students at Boardman schools. 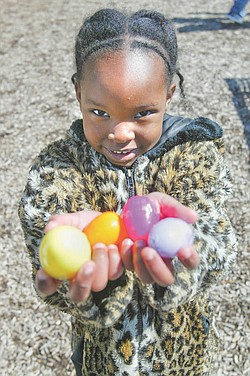 Esther Gitimu shows off the handful of Easter eggs she collected at an Easter egg hunt Tuesday sponsored by the Boardman Kiwanis for kindergarten students at Boardman schools. 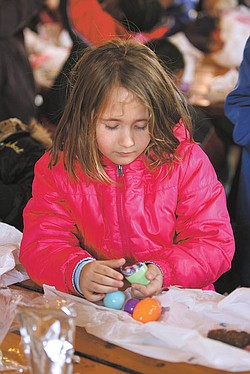 Samantha Lochrane opens one of her plastic eggs.

Esther, a student at Robinwood Lane Elementary School, was one of about 330 kindergartners treated Tuesday to an Easter egg hunt by the Boardman Kiwanis. Kindergarten children at the township’s four public elementary schools got a turn collecting eggs.

Children donned their winter coats and hats to search for the holiday treats at Boardman Park’s Kids’ Town.

“The eggs are stuffed by the Boardman Home Ec. classes,” he said.

Kiwanis members pick them up, and Key Club members from Boardman and South Range high schools hide the eggs throughout the playground.

Then the Easter Bunny leads the jumping, squealing children into the playground.

Stadium Drive’s Kira Vasko and Cassidy Bryan, both 5, and Madison Kelso, 6, showed off their eggs.

“It was fun,” Madison said.

Kira was hoping to find chocolate inside.

Cassidy hoped for chocolate and licorice.

“When they’ve found the eggs, then they go back to the pavilion, and we have juice boxes and Giannios [Candy Co.] gave chocolate bunnies,” Basista said. “They do that every year.”