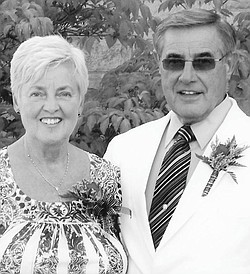 Mr. and Mrs. Walter Avdey of Coitsville celebrated their 50th wedding anniversary by renewing their marriage vows on May 29 during a Mass officiated by the Rev. John Jerek at Holy Trinity Church in Struthers, where they are longtime members.

Afterward, they were honored at a family dinner at Alberini’s Restaurant in Boardman.

Hosts for the festivity were their children and their spouses, Walter and Laura Avdey of West Lake and Andrea and John Cummings of Coitsville. They have three grandchildren, Michael, Mathew and Steven Avdey.

The former Judith Sturm and Mr. Avdey were married May 28, 1960, at Our Lady of the Holy Rosary Church in Lowellville, one of the last weddings to take place at the old church.

Mr. Avdey, a U.S. Navy veteran, retired 16 years ago from the food industry. He has been a Coitsville Township trustee for 24 years.

Mrs. Avdey was employed by Dollar Bank prior to becoming a nurse.

She retired after working at St. Elizabeth Hospital for 19 years.