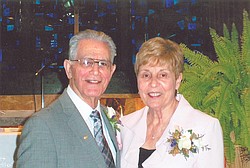 Mr. and Mrs. Tony DeFelice of Poland renewed their marriage vows during an anniversary Mass celebrated by the Rev. Gerald Delucia on Thanksgiving Day at St. Lucy Church in Campbell.

The former Carmel Gatti and Mr. DeFelice were united in marriage Nov. 19, 1960, at Immaculate Conception Church in Youngstown.

The couple also were honored on their 50th anniversary by close friends and family members at a surprise party on Nov. 27 at St. Paul Church in New Middletown. Invitations for the event were issued by their children and their spouses Anthony and Tina Marie DeFelice of Poland and Vince and Annette Romeo of Howland.

Their family also includes their grandchildren, Stan and Marielena Gozur of Bloomington, Ill.; Anthony and Dominic DeFelice, both of Poland; and Vincenzo, Giuliano and Luciano Romeo, all of Howland.

Mr. DeFelice served with the 7th and 31st Armored Division Band in W ºrzburg, Germany, from 1951 to 1953. He retired as a district sales manager and CLU from Metropolitan Life Insurance Co. in April 1992.

Mrs. DeFelice was a buyer and model with Livingston’s in downtown Youngstown and with the House of Fashion in Warren prior to her marriage. She is employed at Holy Family Church in Poland.