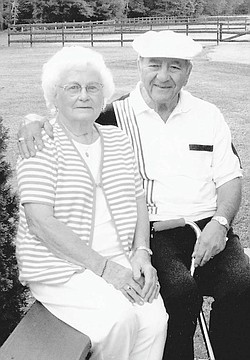 Mr, and Mrs. Louis Pizzuto of Liberty celebrated their 65th wedding anniversary with their family during a dinner on July 25 at Nicolinni’s Ristorant in Boardman.

Their family includes Josephine and John Dyer of Newton Falls and Janet and Frank Slovasky of Liberty, and two granddaughters, Melissa Ann Marx of Phoenix and Sara Lynn Belle of Columbus. A son, Jerry Pizzuto, is deceased.

The former Dorothy Turchan and Mr. Pizzuto were united in marriage July 21, 1945, at St. Nicholas Byzantine Catholic Church in Campbell. They renewed their nuptial vows on June 6 during a ceremony celebrated by Bishop George Murray at St. Columba Cathedral.

Mr. Pizzuto is retired after 40 years of service with Commercial Intertech. His wife is a homemaker. They are members of Our Lady of Mount Carmel Church in Youngstown.