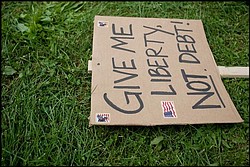 COLUMBIANA — Former U.S. Rep. James A. Traficant Jr. had some sound advice for those opposed to big government bailouts, a growing federal deficit and costly programs.

Don’t just expound on what you oppose, he said.

“Advocate what you propose, that which you want to see happen,” Traficant told hundreds of area residents attending a Taxed Enough Already party this afternoon in Firestone Park here.

Traficant, released from federal prison Sept. 2 after serving seven years for racketeering, bribery, obstruction of justice and tax evasion, was the last of seven speakers to address the event, and it was clear that many in the crowd were there to hear him speak.

He was greeted with a standing ovation as he walked from a park pavilion to the rally, and there were plenty of “Welcome Home Jimbo” signs and T-shirts to be seen.

He was greeted by many as a hero, and there were calls for him to run again for the House of Representatives or the Senate, and, although he addressed those calls indirectly, he offered no commitment.

“I don’t know what I’m going to do,” he said in response.

“If I do go, you don’t have to give me any money. You just get me those votes,” he said, as the crowd roared its approval.

Members of Tri-County TEA said the crowd numbered around 1,500, but a more conservative estimate put the number at closer to 800.

For the complete story, see Sunday’s Vindicator and Vindy.com