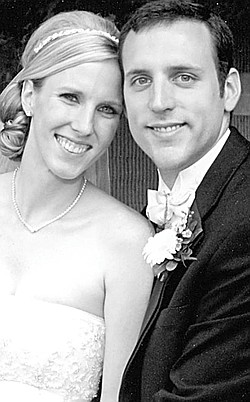 MCDONALD — Louise Ashley Frey and Robert James Kotel, both of 3609 Vicary Square, Apt. 3, Canton, were united in marriage at 2:30 p.m. Aug. 22 at Our Lady of Perpetual Help Church.

Officiating were the Revs. John Madden, Daniel Kulesa and James Walker. A reception followed at The Avalon Inn in Howland.

The daughter of Lee and Laura Frey, 305 W. Main St., Canfield, and son of Mr. and Mrs. Louis Kotel, 2383 Watson-Marshall Road, honeymooned in Aruba and live in Canton.

The bride’s strapless satin A-line gown was adorned with beading and featured an embroidered empire bodice and a pick-up skirt that flowed into a chapel train.

The groom graduated from Youngstown State University with a bachelor’s of engineering degree in mechanical engineering.