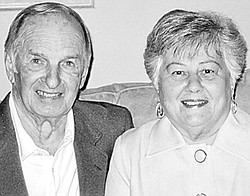 Mr. and Mrs. James A. Sabol

STRUTHERS — St. Lawrence Church in Hillsville, Pa., was the setting on April 18, 1959, as James A. Sabol and Esther Grilli were united in marriage.

In celebration of that event, Mr. and Mrs. Sabol, 557 W. Omar St., were honored during a family dinner party that took place at 6 p.m. April 25 at Scacchetti’s in Boardman.

Hosts for the festivity were their children and their spouses, Leanne and Al Franceschelli and Brian and Marcia Sabol, all of Poland, and David and Kathleen Sabol of Austintown.

Mrs. Sabol was a secretary at The Heart Center in Youngstown prior to retiring in 1993.

Mr. Sabol, an Army veteran, retired in 1992 from Ohio Bell in Youngstown, where he was a repair technician. He is a member of the Telephone Pioneers and Elmton Golf League.

Mr. and Mrs. Sabol are members of St. Nicholas Church.