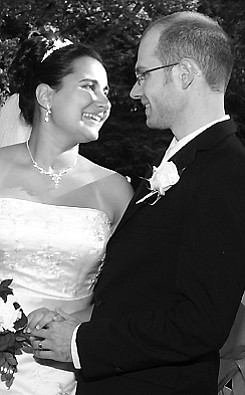 BOARDMAN — Stephen Frederick Ullom and his bride, the former Michelle Ann Donnadio, both of Akron, were married in a 1:30 p.m. ceremony Oct. 4 officiated by the Rev. Philip Rogers at St. Charles Borromeo Church. They received congratulations at Antone’s Banquet Centre.

The bride’s parents are Anthony and Mary Ann Donnadio of Boardman, and the groom’s parents are Frederick and Jennifer Ullom of Youngstown.

The bride’s strapless gown was adorned with beading and metallic embroidery and featured a chapel train.

Best man for his brother was Gregory Ullom, and groomsmen were Jonathan Airhart and Joshua Engle, the groom’s cousins; Jonathan Thomas; and Robert Kotel. Junior groomsman was Nicholas Williams, cousin of the bride.

The Ulloms earned bachelor’s degrees in electrical engineering from Youngstown State University, and he earned a bachelor’s in computer science.