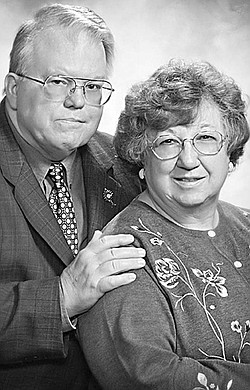 POLAND — Mr. and Mrs. Jack Witherow of Poland celebrated their 50th wedding anniversary Nov. 28 by renewing their marriage vows during a 4 p.m. Mass officiated by the Rev. Bob Bonnot at St. Nicholas Church in Struthers, where they were united in marriage on that date in 1959 and where they are members.

After the ceremony the couple were honored at a private family dinner hosted by their daughters. Also as part of the anniversary celebration, Mr. and Mrs. Witherow vacationed 10 days in Mau, Hawaii.

Mr. Witherow served four years with the U.S. Army Reserve and retired in 1989 from Federal Wholesale in Hubbard.

Mrs. Witherow, the former Ann Toto, retired from Duca Manufacturing in Boardman in 2005 after 27 years of service as an administrative assistant.