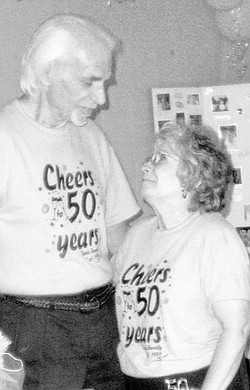 BOARDMAN — Mount Olivet United Church of Christ in North Lima was the setting from 1 to 5 p.m. July 25 for a picnic at which Mr. and Mrs. Phillip Davis, 233 Wildwood Drive, celebrated the 50th anniversary of their wedding.

Hosts for the event were their children and their spouses, Vickie Fowler of Rogers, Tina Davis of East Palestine, Tracy and Glenn Crosby of Leetonia, Lisa and Ted Murphy of East Palestine, and Jeff and Michelle Davis of Columbiana. There are 10 grandchildren in the family.

The former Barbara Beard and Mr. Davis were married July 25, 1959, at the Reformed Church in Youngstown. They are members of Castlewood Chapel.

Mrs. Davis is a caregiver with Home Instead Senior Care.

Mr. Davis served with the U.S. Navy. He is an instructor in the fitness department at the Davis Family YMCA and a member of Silver Sneakers and Time Bank Mahoning Watershed.