A bridge to remember 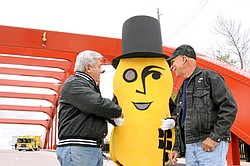 NUT CREATORS: Dick Tranick and Joe Mansky are two of the original pipefitters who created Mr. Peanut for Spring Common Bridge and are responsible for putting him up in the late 1980s. Mr. Peanut sat high on the old green bridge and greeted travelers at the Oak Hill Avenue entrance.

1Laura Goist and her daughter, Robin, of Boardman went to the bridge ceremony Friday for two of the three.

“I’ve been counting down the days,” said Laura, 43, of her anticipation to travel across the bridge that has been closed since January for a renovation that cost about $5 million. The project included replacement of the deck, sidewalks and outside railings, repair and replacement of structural steel and painting.

Laura works at Youngstown State University and the trip to the city will take less time now that the bridge is opened, she said.

“It was always the Mr. Peanut bridge to me,” said 12-year-old Robin while sporting a top hat like the snack character and a shirt with a Mr. Peanut picture.

Whether the bridge is called the Mr. Peanut bridge or Spring Commons bridge, the ceremony attended by more than 100 people was to dedicate the bridge to Mahoning Valley firefighters who lost their lives in the line of duty.

“The dedication of this bridge is a way not to forget the sacrifices made by Mahoning Valley firefighters,” said Chief David Comstock of the Western Reserve Fire District.

“We don’t mind sharing our history [with Mr. Peanut],” he said.

While lights of firetrucks flashed in the background, firefighters, city officials, bridge engineers and contractors all cut the ribbon welcoming back the bridge that connects the West Side to downtown.

Youngstown alone has 19 fallen firefighters and O’Neill said he’s been trying for 10 years to have a bridge dedicated to area firefighters.

“It’s for all of Mahoning County,” said O’Neill.

“It’s nice because it causes a little more unity amongst the stations in the county. We all have the same job to do,” he said.

Originally built in 1949, the bridge’s vintage and recognizable arches were kept intact to retain the history of one of downtown’s main entrances.

“[The renovation] was a long project, but the best part is that we were able to bring it back up to its structural integrity,” said Jim Henry, resident engineer for MS Consultants.

“It should be good for another 30 years,” he said.

Though the bridge is open for traffic, painting underneath the structure will continue for about two more weeks.

Front Street will remain closed until the painting is complete.

The bridge ceremony was the start of a big weekend for the Valley, said Phil Kidd, director of downtown events.

With the Ursuline and Mooney football game and NBC filming downtown Friday, and the ice show at the Chevy Centre and the Kelly Pavlik fight on Saturday, the bridge opening was a great kickoff, said Kidd.

“It’s nice to see a lot of different area representatives here,” he said of all those who came out to the ceremony.

After the ribbon cutting on the bridge, Kidd invited everyone to visit B&O to take a look at the new Rust Belt Brewing Co. that will be opening soon.

Nick Hrelec, Campbell fire chief, stopped down to B&O after the ceremony to check out the new business.

“We need more things like this downtown,” he said.