The 40,000-square-foot center is set for a ribbon cutting at 5 p.m. Thursday on the Southwoods 250 DeBartolo Place campus. There will be an open house and guided tours from noon to 4 p.m. on Sunday.

Southwoods CEO Ed Muransky said the center is part of a years-long plan to develop spine surgery and pain programs in the area and bring more doctors and supplemental medical professionals.

“There are millions of people out there — a lot of people — that deal with chronic pain and don’t know what to do every day,” Muransky said. “It’s a heck of a lot easier for the people in pain not to have to drive an hour every time — or two hours — to see their doctor.” 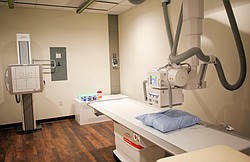 The center can treat “a variety of pain and spine conditions,” including neck and back pain, fibromyalgia, herniated discs and neuropathy as well as pain from arthritis, cancer or shingles.

Before the new center, a patient’s pain treatment regimen could entail a trip to the Southwoods campus for a shot, then to the patient’s general practitioner, then to a separate medication management professional — then they do it all over again, Muransky said.

At the Southwoods center, medical professionals collaborate and coordinate treatment on-site, rather than building-to-building as medical suites are centered around a pain management facility.

The center also offers navigators and concierges to direct patients for treatment. Instead of listening for a nurse calling their name, patients are summoned from the lobby by vibrating pagers, said Mark Paczak, the center’s pain management director.

“As you’re going between providers and appointments or rehab, nerve tests, you’re going to have a person in your life that’s going to help you coordinate that,” Muransky said. “Up unto this point, it’s really been a ‘jumble’ in the medical community as these patients have kind of been ‘pushed around.’

“Our slogan is, ‘It’s not just about the treatment but how you’re treated,’” he added.

Paczak said clinical professionals were consulted “on every aspect” of the procedural space’s design, which includes numerous safety or privacy features such as ventilator support in operating rooms or staggered patient rooms with half-frosted glass doors that protect patient privacy while making it easier for staffers to watch multiple bays at once, Paczak said.

“When you think about the patient first and you build around the patient, you can’t go wrong,” he said.

Muransky said the Southwoods facility has hired about 150 more medical professionals since the pain center’s development began three years ago, and he expects Southwoods could hire 100 more for the new center. The center has already hired two full-time pain management doctors on its way to four.

“It’s something the public needs. It’s something the doctor needs ... in this time where every job is so important,” Muransky said. “Part of it was the Youngstown area in spine (treatment) went from having three or four wonderful surgeons to kind of overnight having one.

“Even when we had three or four, there still was a five- to six-month wait for people to see their spine surgeons. I thought that was wrong.”

With the new addition, the Southwoods Boardman campus now employs about 1,000 people, according to a news release.