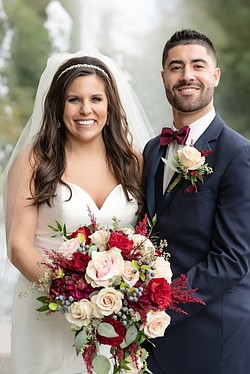 The Rev. Zachary Coulter presided for the exchange of vows between Courtney Rothbauer and Dominic DeFelice during their wedding ceremony at 2 p.m. Oct. 20, 2018, at St. Christine Church.

After the newlyweds were congratulated at a reception at Blue Wolf Events at The Maronite Center, they honeymooned in Riviera Maya, Mexico. They reside in Boardman.

The bride is the daughter of Eric and Rosemary Rothbauer of Boardman. Anthony and Tina Marie DeFelice of Poland are the groom’s parents.

A floor-length strapless, ivory satin gown with a tiered-ruffle skirt, was worn by the bride. Her ensemble was completed with a chapel-length train.

Klara, Emilea and Melina Edenfield were the flower girls.

The ring bearer was Michael Gozur, the groom’s nephew.

Mrs. DeFelice graduated from Youngstown State University with a bachelor’s degree in middle-childhood education and is a fifth-grade teacher for the Canfield Local School District.

Her husband graduated from YSU with a bachelor’s degree in accounting and earned a master’s degree in business administration. He is a manufacturing supervisor at Aptiv Global Technology in Warren.