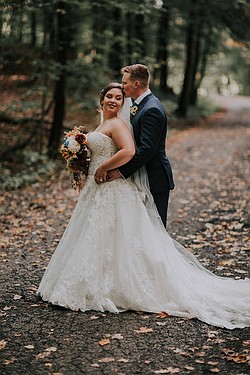 Heidi Gonzalez became the bride of Robert Parker on Oct. 6, 2018, at Bible Baptist Temple in Campbell. Officiant for the 2 p.m. ceremony was the Rev. Matthew Ferguson.

The newlyweds received guests at an evening reception at the Archangel Michael Community Center.

After a honeymoon cruise to the Grand Cayman Islands and Cozumel, the couple reside in Moore, Okla.

Lisa and Delfin Gonzalez of Boardman are the bride’s parents.

The groom is a son of Darlene Hyslop of Muskogee, Okla., and the late Johnny Parker.

Fashioned of tulle, the bride’s strapless ball gown was enhanced with lace appliques and scattered sequins. It was designed with a sweetheart neckline, back corset, scalloped hemline and chapel-length train. Her ensemble was completed with an angel-cut cathedral veil with stitched edging and lace motifs.

Hannah Gonzalez, the bride’s sister, was maid of honor, and Deborah Mikina served as matron of honor.

Lillianna Martinez, cousin of the bride, was the flower girl.

The attendants’ dresses were burgundy.

Johnathan Parker, brother of the groom, served as best man.

The groom’s nephew, Kyle Parker, was the ring bearer.

Mr. Parker is a floor hand for Cactus Drilling in Oklahoma City and a member of the Army National Guard.