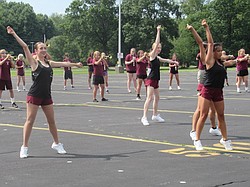 Neighbors | Jessica Harker.The Boardman band performed their annual show in preperation for the school Band Night on Aug. 16 outside of Boardman High School. 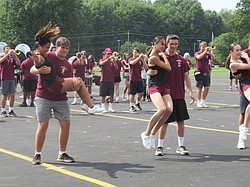 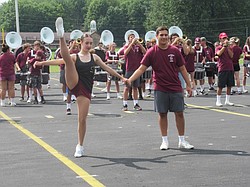 Neighbors | Jessica Harker.Members of the Boardman Color Gaurd danced with band members during the performance of their Motown medley on Aug. 16 outside of Boardman High School. 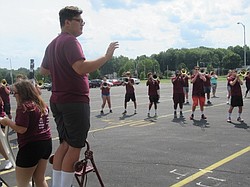 Neighbors | Jessica Harker.Boardman seniors assisted in conducting the band as they prepared for the school's annual Band Night performance on Aug. 16. 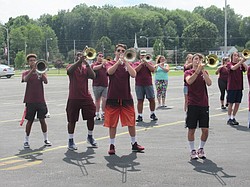 Neighbors | Jessica Harker.Members of the Boardman band performed their show in preperation of the school's Band Night on Aug. 16 at the Boardman High School.

“We are very excited about the show,” said Band Director Thomas Ruggieri. “It is going to be a great night.”

“The band is doing a lot of fun and things with our show this year,” Ruggieri said.

Each of the other schools performed their show before Boardman took the stage.

Ruggieri said that this year’s show starts with a Queen opener, with the song “Don’t Stop Me Now,” including a portion of “Bohemian Rhapsody.”

The band then played a Motown medley, with the songs “Ain’t No Mountain High Enough,” “My Girl” and “Signed, Sealed, Delivered.”

“The medley does include vocals and some Motown choreography,” Ruggieri said.

The band then played its senior feature, “Baba O’Riley,” as well as a drum feature.

“For the closer we are celebrating the 20th anniversary of ‘SpongeBob,’” Ruggieri said.

“The ‘SpongeBob’ portion is pretty special. We are acting out some of the musical scenes with out doing the whole episode,” Ruggieri said.

He added that the performance will include props made by students and some acting to correspond with the music.

Ruggieri said that the band decided to host the event much earlier in the year than they usually do to prevent the weather from effecting it.

“I had to move it out of hurricane season,” Ruggieri said, explaining that in the last four years the event had to be canceled three times due to the weather.

The Boardman band will also be performing at other local school band nights throughout the year, including Canfield’s Show of Bands on Sept. 27 and Austintown Fitch High School’s band night on Sept. 28.