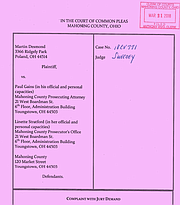 The lawsuit states Desmond’s firing has been financially and emotionally devastating, which was compounded by humiliation and reputational damage that resulted in his inability to find work as a prosecutor. It asks the judge to order Desmond’s reinstatement and to award him compensatory and punitive damages for back pay, pain and suffering, mental anguish, emotional distress, humiliation and inconvenience.

At a news conference April 27 when Gains announced his decision to fire Desmond, he said Desmond violated office policy by discussing a matter he was no longer handling with people outside the office, including a lawyer, who sued the county in federal court.

A federal judge dismissed that lawsuit, according to court records.

It concerned Kalilo Robinson, a witness in a murder case whom prosecutors indicted on charges of tampering with evidence and obstruction of justice.

Desmond claims the charges resulted from Robinson’s decision to invoke the Fifth Amendment privilege against self-incrimination.

Gains said the prosecutor’s office investigated the allegations and found no evidence of misconduct.

The lawsuit argues Gains knew Desmond did not assist another attorney in suing the county and Gains prepared false disciplinary charges against Desmond and “launched a press campaign to destroy his credibility, savaging his hard-won reputation.” It argues that Desmond was not using the county’s account for an online legal research service to aid in the federal case against the county, but for an unrelated case.

Desmond initially appealed his firing to the State Personnel Board of Review, which dismissed his allegations of wrongful termination.

Desmond sought to receive whistleblower protection, but an administrative law judge said he did not qualify. An appeal of the decision by the SPRB remains open in Mahoning County Common Pleas Court.