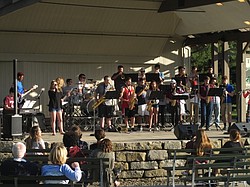 Neighbors | Zack Shively.Boardman's jazz ensemble 2 took the stage at the Maag Theatre in Boardman Park on June 5 as 2k18, a rock 'n' roll group. They played popular songs from rock, pop and rap musical genres. Pictured, the band performed Paramore's "Ain't It Fun?" near the beginning of their set. 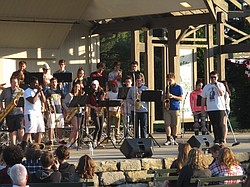 Neighbors | Zack Shively.Boardman band's 2k18 School's Out featured a number of songs from a range of different years, such as 1997's "My Hero" from Foo Fighters, 1975's "December '63" from The Four Seasons and 1983's "Burnin' Down the House" by Talking Heads. Pictured, the band performed 2005's "Feel Good Inc." by Gorillaz. 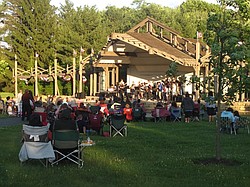 Neighbors | Zack Shively.The Boardman jazz ensemble 2's 2k18 performance at Boardman Park allowed the students to perform a rock concert on the final day of school. The group organized their rock repertoire during the school year for basketball games. Pictured, they mixed together than normal style of music, jazz, with the rock genre for Reel Big Fish's ska song "Sell Out." 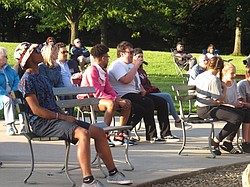 Neighbors | Zack Shively.The 2k18 School's Out rock show at Boardman Park kicked off the summer series for the Boardman jazz groups. The have performances in at Firestone Park and the Rock and Roll Hall of Fame. 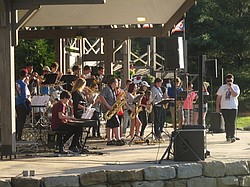 Neighbors | Zack Shively.The jazz ensembles instrumental composition remains nearly the same as it would be during their typical jazz performance, but their song choices come from popular radio hits, such as Khalid's "Young Dumb & Broke" and Hailee Steinfeld's "Love Myself." Pictured, they played an alternative rock song, Muse's "Supermassive Black Hole."

Boardman High School’s jazz ensemble 2 took on a different look for their “School’s Out For the Summer” rock ‘n’ roll show at Boardman Park on June 5.

The ensemble, taking the name 2k18, performed songs from the genres of rock, pop and rap as opposed to the jazz standards they typically play. The group does these types of songs at the school’s basketball games.

“It’s a more practical and modern approach to being in a band,” said Thomas Ruggieri, the band’s director. He explained that the opportunities to join a professional concert or jazz band are slim since they are so few, but the students can make their garage bands and wedding bands.

The group’s song selection included many songs spanning various years. They opened with “My Hero,” a song by Foo Fighters from 1997, followed by 1983’s “Burning Down the House” by Talking Heads. They also performed a cleaned up version of “Young Dumb & Broke,” by Khalid, which released in 2017.

The concert also featured many different genres of songs. They played the Muse’s alternative rock song “Supermassive Black Hole,” Hailee Steinfeld’s pop song “Love Yourself” and Fatboy Slim’s big beat song “Praise You.” They combined their love of rock and jazz for the ska hit “Sell Out” by Reel Big Fish. They even played the theme song from the Nickelodeon show “iCarly.”

The show took place the night of the last day of school for the school’s underclassmen, which is why the night had the theme. The concert marked the first of a series of performances that some of the Boardman jazz students will do during the school year.

“The kids wanna play. They have so much fun during the year and they can’t get enough,” said Ruggieri on why he has summer performances for his group. The students demonstrated the truth of his statement with smiles and laughs throughout their performance.

The jazz program had another performance at the park on June 21 and will play at Rock and Roll Hall of Fame on July 23 as a part of their summer series.