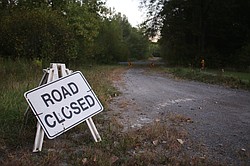 Once expected to be the next major residential development in Youngstown, the Sharonline neighborhood in the city's northeast corner was never fully populated. Now as the population shrinks, abandoned streets are being closed and returned to nature. But Sharonline is far from dead.

At the crossroads of the East Side’s main thoroughfares is the Sharonline neighborhood that represents both the one-time vision of a vibrant, growing Youngstown and the reality of the city’s decline.

McGuffey Road, connecting downtown Youngstown with the East Side, eventually ends in Coitsville. Running north and south is Jacobs Road, which starts at Campbell’s northern border, runs over McKelvey Lake and ends just outside the center of Hubbard.

There, at the corner of the roads, is a brown sign, 5 feet high and bearing the image of a streetcar. It reads “The Sharonline Welcomes You.”

In July 2016, the city enacted the “East Side Decommissioning Project.” Though the name is something of a misnomer – nothing was being shut down, but abandoned areas were allowed to return to nature – the project was the first intentional downsizing of the city’s developed lands.

The project saw nearly 4 miles of streets in the Sharonline neighborhood closed off and nine homes demolished to curb illegal dumping and reduce city spending on the sparsely populated area.

The Sharonline takes its name from a streetcar that formerly ran along Jacobs Road. Between 1901 and 1939, the Youngstown-Sharon Railway and Light Co. operated streetcars between the cities.

Youngstown’s population exploded beginning around 1870, shooting from slightly more than 8,000 residents that year to approximately 170,000 in 1930.

The growth was fueled when the coal and steel industries attracted European immigrants as well as workers from Appalachia to the city.

As the city grew, planners and developers saw the undeveloped land to the east as a reasonable region for expansion. At the time, Sharon, Pa., experienced its own population boom, and Youngstown’s population was expected to balloon up to more than 250,000 by the 1980s.

Developers reasoned that a suburban, residential area within driving distance of the steel mills in either city would be attractive to the growing population. To prepare for the expected influx of residents, the city planned and paved streets, installed power lines and ran water to the area. Though the neighborhood’s namesake streetcar was shut down in 1939, Jacobs Road was still a major traffic artery for those traveling to Campbell to work in the mills.

Unfortunately for the developers and the city officials planning the neighborhood, the population growth projections that inspired the construction proved to be incorrect.

Starting in the 1960s, the city’s population began a 50-year decline that continues today. Rather than moving to city neighborhoods such as the Sharonline, the post-World War II generation left the city for the suburbs, such as the developing Boardman.

Whether the shift away from Youngstown was white flight, a desire to escape the sooty skies of mill-era Youngstown or a combination of those and other factors, it resulted in a Sharonline that was developed but largely empty and left to its own devices in the city’s northeast corner.

As Youngstown hemorrhaged population, the Sharonline stayed in step, with more and more residents leaving and more and more houses sitting vacant.

Today, the Sharonline’s population is slightly more than 4,000 people.

Though the expected influx of residents never materialized, Sharonline wasn’t abandoned. Demographics on the East Side shifted from primarily Italian and Irish immigrants to African American and Latinos. As such, the Sharonline became a predominantly black neighborhood.

T.J. Rodgers, the city’s 2nd Ward councilman and the representative for the East Side, grew up in the Sharonline and recalls the pride residents had for their neighborhood.

Sharonline,” Rodgers said. “It’s a very proud neighborhood, even those who’ve moved away are still proud to have grown up there.”

Sharonline residents have even gone so far as to arrange a large reunion every three years, drawing former residents back to the neighborhood for a celebration and parade.

Central to the community pride felt by those from the Sharonline is the McGuffey Centre, a community center at the heart of the neighborhood, formerly known for its robust youth programs and social services.

The original McGuffey Centre was established in 1939 as a way to establish a centralized location for social services needed in the remote community. In the early 1960s, the original building was demolished and a new, larger building – which still stands – was built in its place.

On top of providing social services, the center also served as an after-school spot for the neighborhood’s kids and offered annual summer programs. Almost everyone who grew up in the Sharonline before the 1990s has a story about growing up in the McGuffey Centre.

Today, the center caters more to seniors than children – a reflection of the region’s age demographics – but Vernon Massengile, the center’s board vice president, wants to return the youth program to its former glory.

Massengile said he practically lived at the center during his youth.

“That was how it was for most of us,” Massengile said. “We were down here every day. That’s why it’s a shame right now that we don’t have the same level of kids programs in place. I’d like to change that. It’s good we have the seniors here, but we need to make sure we’re serving the kids, too.”

Massengile left the Sharonline after he graduated high school, working for 30 years at the General Motors Lordstown Assembly Complex before moving back to his hometown. He returned to help care for his aging mother, but became involved in the center after learning most of the building wasn’t in use.

“I’m not in the business of blaming anyone for anything that happened in the past, but when I got here, the center was a mess, and there were barely any kids’ programs,” he said. “There may not be as many kids around here as there were, but they still should have somewhere to spend their time and come in and learn.”

Massengile isn’t the only one trying to breathe new life into the neighborhood. The Youngstown Neighborhood Development Corp., in conjunction with Rising Star Baptist Church, has created a neighborhood action plan for addressing some of the longstanding issues facing the Sharonline.

NEITHER FORGOTTEN NOR FORSAKEN

For Tom Hetrick, the neighborhood planner at the YNDC, engaging with the Sharonline is a unique undertaking.

Beyond the neighborhood’s distance from downtown, the Sharonline also became a notorious dumping ground for refuse of all types.

Before the decommissioning project, empty, abandoned roads often became dump sites, with everything from general black trash bags all the way to old boats discarded on would-be lawns.

Preventing further dumping became a primary objective of the decommissioning project’s goal of shutting down an entire section of the neighborhood.

“I think it’s important to note the city isn’t shutting anything down,” Hetrick said. “It’s not a part of the city that we can just lob off.”

At the same time, Hetrick also said it was unlikely any major economic drivers were going to move into the area.

“When I look at the empty land behind this church, I see businesses, homes, recreation areas,” the Rev. Mr. Donaldson said.

One of the plan’s five-year performance goals is to use Rising Star as a small-business incubator, encouraging business growth from the ground up by providing opportunities for local entrepreneurs.

In order to attract businesses back to the region – and new homeowners – the Sharonline will have to contend with its reputation for criminal activity.

According to a crime map compiled by the YNDC using data from the Uniform Crime Reporting system, the Sharonline neighborhood is among the safest in the city. “Back in the ’80s and early ’90s, the reputation for crime may have been more warranted,” Rodgers said. “But nowadays the neighborhood is quiet.”

“What you tend to see more of is crimes being committed in other parts of the city and then victims being dumped on the East Side,” he said. “But the neighborhood itself is actually very safe.”

Ultimately, the YNDC plan is meant to increase property values by decreasing blighted or vacant land in the neighborhood and to make more effective inroads with Sharonline community groups and institutions to help facilitate continued collaborative projects.

The YNDC plan is effectively a successor to the decommissioning project; the project reshaped the neighborhood, and the YNDC plan aims to begin the long process of keeping it maintained.

For some, like Massengile, the promise of serious government investment in the area will be a welcome change from the status quo.

“We were always like outsiders out here,” he said. “We took care of ourselves and nobody complained. But we need to get roads paved and ready for winter, we need to continue addressing the dumping issue, we need abandoned houses knocked down. We need a new roof for the community center. We need more help.”

Whether any significant economic forces return to the area, the Sharonline likely will persist, at least as long as the longtime residents choose to stay in their family homes.

But for many residents who have long felt abandoned by the city, seeing a renewed interest in the historic neighborhood is a long-awaited relief, as was evidenced by a comment left for the YNDC by a Sharonline resident.

“We appreciate your concern,” it said. “And we know we are not forsaken.”