911 calls from the shooting in Howland on Saturday in the front yard of a Niles-Cortland Road (state Route 46) home that left two dead and three hospitalized. 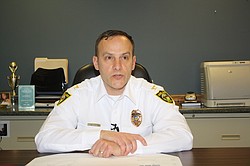 HOWLAND — The Howland police chief has identified one of the two people killed Saturday afternoon as Josh Williams, 20, and said the other male who died is 19, but he did not identify him.

A juvenile male, 17, was grazed by gunfire. The chief did not identify him.

Trent drove all five shooting victims to Hamad's house, where a physical confrontation took place, escalating to Hamad firing shots at about 4:25 p.m., the chief said