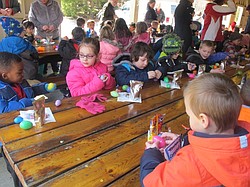 Neighbors | Alexis Bartolomucci.Students showed each other what they got in their eggs as they drank their juiceboxes and ate the chocolate rabbits provided by the Boardman Kiwanis Club on March 22. 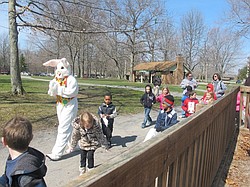 Neighbors | Alexis Bartolomucci.Kindergarten students from Boardman schools followed the Easter Bunny at Boardman Park on March 22 to participate in an Easter Egg Hunt put on by the Boardman Kiwanis Club. 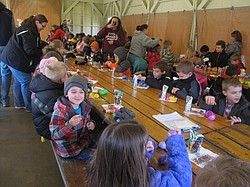 Neighbors | Alexis Bartolomucci.Students sat at the table in the pavillion and opened up their Easter eggs to see what candy they got inside. Juiceboxes and a chocolate bunny were given to the children as a snack after the hunt. 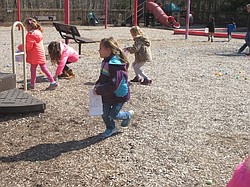 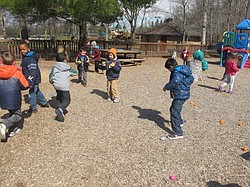 Neighbors | Alexis Bartolomucci.Each of the students collected four Easter eggs that were scattered all around the playground at Boardman Park.

Kindergarten classes from Robinwood Lane, Market Street, West Boulevard and Stadium Drive Elementary Schools participated in the egg hunt. More than 5,000 eggs were placed all around the playground at Boardman Park. The eggs were filled with small candies and each student could collect four eggs.

Two schools visited Boardman Park in the morning while the other two schools arrived in the afternoon.

The Boardman Kiwanis Club hosts this egg hunt every year, along with several other annual events, for the students of Boardman to have fun and get outside of the classroom.

When the children finished collecting their eggs, they went into the pavilion for a treat from the Kiwanis Club. There was a chocolate rabbit for the children to eat and a juice box for them to drink, along with the candies they got in their eggs.

After the children finished their treats and met with the Easter Bunny, they went back to school to finish their day.

Wright said that the event makes many of the volunteers remember how much fun they had participating in egg hunts when they were children.

“It makes you want to be a kid again,” said Wright.