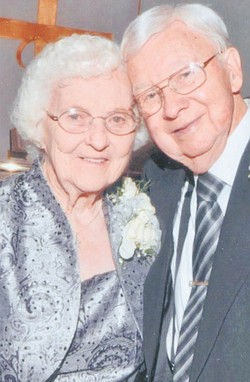 In celebration of their 70th anniversary, Doris and Robert Bishop, known to their friends as Dot and Bob, of Austintown renewed their wedding vows July 15 at West Austintown United Methodist Church, where they are members.

Hosting the event were the couple’s daughters and their spouses, Joy Bayless of Austintown; Sue (Bob) Blake of Clearwater, Fla.; and Gay (John) Blackann of Austintown. The Bishops have seven grandchildren and eight great-grandchildren.

Mrs. Bishop, the former Doris Fee, is a homemaker. She is active in their church as a member of the United Methodist Women, quilting group and choir, and she is chair and a 50-year member of the Order of Eastern Star.

Mr. Bishop had worked for U.S. Steel and McDonald Steel in Youngstown as an electrical test engineer. He retired in 2011. He is a member of American Legion, VFW, Pearl Harbor Survivors Association and Mended Hearts and is past master of Hillman Masonic Lodge.

A World War II veteran, he was in the U.S. Navy for 11 years and served aboard the USS Tennessee, a battleship, during the attack on Pearl Harbor in 1941. He also served on the USS Shenandoah during the Korean War.