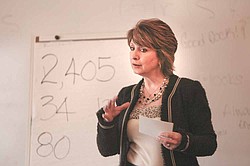 Lori O’Neill of Gun Sensus, an organization whose mission is to “bridge consensus and reduce gun violence,” makes a point with numbers as she addresses an ACTION clergy caucus Tuesday hosted by St. Patrick Church, Youngstown. About 2,405 Americans have been gunned down since the beginning of the year. O’Neill talked about the gun show loop hole. 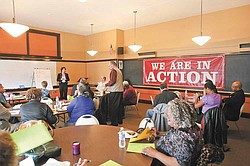 Members of ACTION clergy caucus listen to Lori O’Neill of Gun Sensus as she talks about the gun show loop hole. The Alliance for Congregational Transformation Influencing Our Neighborhoods is a faith-based regional organization of leaders and congregations in the Mahoning Valley who work together against injustice in the community.

Lori O’Neill of Gun Sensus, an organization whose mission is to “bridge consensus and reduce gun violence,” targeted the “gun-show loophole” during a presentation Tuesday to an ACTION clergy caucus at St. Patrick Church, 1420 Oak Hill Ave.

First she wrote a series of numbers for the 21 members of the Alliance for Congregational Transformation Influencing Our Neighborhoods. She noted:

2,405 Americans have been killed by guns since January.

20 law enforcement officers have been killed by guns this year.

34 Americans are murdered every day.

80 Americans die every day of other causes.

11 people were victims in the shooting near the Youngstown State University campus.

O’Neill said gun shows and sales are simply a “flea market free-for-all." “There are no background checks, no identification needed and no receipts,” she said, adding that “criminals know this, and it poses a menace.”

Of course, many customers at gun shows are law-abiding citizens who own guns and have had background checks to obtain them.

O’Neill said when a person buys a gun from a federally licensed dealer, such a store or gun dealer, they go through a background check to determine if he or she is eligible to own a gun. A person can’t own a gun if he or she is a felon, has domestic-violence charges, is younger than 21 or is mentally ill.

O’Neill said many people spout the Second Amendment, which protects the right of the people to keep and bear arms, when any type of gun legislation is discussed. Ironically, the people that would be most affected by gun laws governing gun-show sales are the ones who already have lost their right to own a gun. “Why would we want to protect illegal purchases" O’Neill asked.

Gerald Nunziato, a retired agent with the Bureau of Alcohol, Tobacco, Firearms and Explosives and Youngstown native, accompanied O’Neill and said gun-show sales aren’t subject to the same regulations as federally licensed dealers. He said laws dealing with interstate commerce, unlicensed gun dealers “engaging in the business,” but not on a regular basis, and people selling firearms from personal collections allow for sales of guns with no background checks, no identification needed and no receipts. Obviously this would allow people who can’t obtain a firearm with a background check a way around that. And that’s the loophole.

Nunziato said the state is missing out on taxes from such sales but apparently the gun industry generates enough tax revenue in other sales.

O’Neill and Nunziato also touched on legislation concerning concealed carry. Both suggested clergy attend an upcoming April 16 and 17 gun show in Niles to observe how guns are sold.