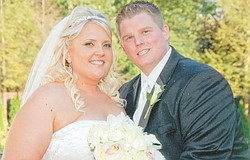 Living in Westbury, N.Y., after their July 2 wedding are Matthew D. Ronan and his bride, the former Kristen L. Mickler.

The couple were married in a 3:30 p.m. nuptial Mass concelebrated by the Revs. Kevin Dillon and Jeffrey Mickler, cousin of the bride, in the Church of St. Aidan.

A cocktail hour preceded a dinner reception at the Fox Hollow in Woodbury, N.Y.

For their honeymoon, the newlyweds traveled to St. Lucia.

Courtney Mickler, sister of the bride, was her maid of honor, and bridesmaids were Melanie Krasisnksi, her cousin; Christy Korchnak; Melissa Lydic; and Jessica Santropetro, all wearing raspberry-colored gowns.

Best man for his brother was Christopher Ronan, and groomsmen were Dale Haag, cousin of the bride; Mike Schiller, cousin of the groom; Carlos Rom-ero; and Carl Guarino.

Mr. Ronan graduated from the University of Pittsburgh with a double major in history and economics. He earned an MBA from C.W. Post University.